Would you like to switch to the accessible version of this site?

Don't need the accessible version of this site?

Send Us an Email

In that role, l taught medical students and residents from both Cornell and Mount Sinai, and was given the title of Clinical Assistant Professor of Pediatrics at both institutions. I performed the above functions from 8 a.m. till 12 noon, and from 1p.m.-7 p.m. I was in private practice.

During the course of my career, I had young children, but always continued working from 8-7 with energy and enthusiasm.

I love Pediatrics and the practice of it with a passion! It has always been the heart and pulse of my life, I come of a generation of physicians in my family. My father was a physician whom specialized in TB which he studied in Davos Switzerland. My two brothers, 9 and 10 years older than I, were physicians as well, one specialized in OBGYN and one in Pediatrics. I lived and breathed medicine and medical conversation all my life. Though I have many hobbies, it is still the focal point that anchors me. 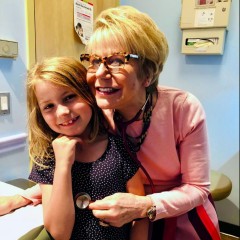 Find us on the map

Emergencies and House Calls Only